Hopefully you’re married to J. If the plans we’re talking about now have actually come together, you’ve been married a couple years, with a little one either being tried and prayed for, or already on the way.You’ve moved at least twice, and you’ve probably got at least one deployment under your belt. He might even be gone right now.

I can’t know all of those things. Or where you’re living, or what state your marriage is in right now. What hurdles you’ve overcome, and what direction your life has taken together.

What I do know, is that five years into a relationship with a man in the military, especially this man – this strong, caring, protective, wonderful, difficult man – you’ve “busted draws” with each other – and probably because of each other (metaphorical ones – not real ones… If you do the orienteering thing with him, go you). Probably ones that people said you’re never going to make it past. That you yourself probably said you couldn’t make it past… And that you probably didn’t realize you were battling until you were already in it. And, because there’s never been so much determination (stubbornness) in one couple, you’ve proven them all wrong. In some cases, it was probably just for the sake of showing everyone that you could.

Maybe you’ve come up in some issue that seems bigger than the two of you. Bigger than the relationship, bigger than all the hard work. Maybe right now, you’re feeling like the Army has (once again) come before, or between, J and you, your family, and your marriage. And, probably, your sanity.

Even if life is perfect – and I really and truly hope it is – take time to remember what things are like for me, 22 year old me, right now. How huge ten hours seemed at the time. How incredibly insurmountable that distance felt. And how even though you’ve finally started to fight, you, at 22, and J at 26, have powered, talked, shouted, cried, and prayed through to so much together.

Take time to think about how, right now, at 22, it feels like the end of the world to get off the phone with him. What it’s like to constantly want to know more about him, and learn what makes that complex brain of his tick. In the moments that he’s around, and you aren’t appreciative, and you’re trying to wrestle control away from him after building up a life with out him, think back on how much I’m wanting to just be near him. Appreciate each other when you’re together, because of how well you made it through this rough patch… Remember the whole month of August? The first meet in the middle visit that was followed by three weeks of trying to learn to be gracious with one another? Hopefully when this chunk of time comes to mind – the tears and late night FaceTime calls, and arguments that you never wanted to have, you think back to yourself; “that… That’s when I knew J and I were going to make it through anything life threw at us.”

He probably still makes decisions with out checking with you first. And, hopefully, in 5 years, you can see the benefit to having someone so strong and decisive to lead your family. Hopefully, you’ve gotten rid of the phrase “I’ve got this.” If not – try to remember how much it grates at him. (Really though – do I ever get rid of it?)

Remember all the times that he gently pushed you to pray out loud when you didn’t want to – especially those nights where you were angry at each other and the last thing you wanted to do was pray for him. Wow, I hope you still pray together when you can. Phones, email, text. That you are both still invested enough that you carve that time out, wherever he is, and wherever you are, to actively bring your relationship to God. And that its only made both your relationships with Him stronger – it can only do good things for you.

I hope you lean into your community as much as you do now. That you still use his sister and brother, and M&M as your mentor couples – that you realize you will always have ways to grow in your marriage, and your friendships, and in your walk with God. That you still go toThursday cookouts, and that you still open up your lives to them.

5 years can hold so much. Growth, pain, happiness, sadness. 17 year old me knew absolutely nothing – and I’m pretty sure 22 year old me won’t either. But I really hope you haven’t lost that reckless feeling – that feeling that when everyone said “don’t do this… It’ll be hard… He’ll be gone all the time, and you’ll have to be alone,” made you say “and?” and dive head first into this… Whatever you are handling – I hope that you can still look at the man beside you, and know that with all certainty, with out any doubts, you can look back on the last 5 years, and together, face anything – you got this. 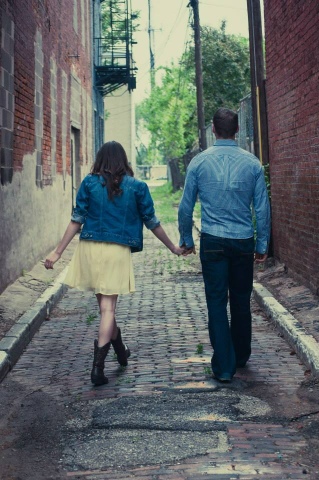