Wednesday, on the way home from work, I got into a car accident. My first ever. It wasn’t fun. It had just started raining, and I hydroplaned into the barrier wall on what is apparently called “dead mans curve” on what is apparently the most dangerous stretch of road in Cincinnati. Awesome. Physically, I’m handling some back/neck/shoulder problems. Mentally, I’m stressed. Car accidents are horrible things.

So, Thursday after work, I was supposed to go straight to see J, on a 10+ hour drive. I was so excited. But, no such luck. I drove home Thursday evening in my moms car – sad, depressed, stressed, and panicky. Then, after exhausting all our efforts, and me not really being that helpful, J decided to rescue me, and bought a round trip ticket for me to come see him. Honestly, I just threw up my hands and told him to “make the decision for me.”

I don’t know what it was, the absolute panic that had to have been coming through in my voice, the back pain I’d been in for two days, or the fact that I had yet to have a conversation with him with out crying in 24 hours – but he stepped up – and I’ve never, ever, felt so loved and cherished, and protected.

A little back story; distance sucks. And when the “honeymoon stage” ends while you’re ten hours apart, you really just don’t see eye to eye. So, the last few weeks of arguing have been horrible. And, the visit was partially so he and I could sort out some things we needed to wrestle with. One of which, was that I felt like I wasn’t a priority. That he wasn’t being as affectionate as he needed to be.

I thought I wanted letters. Or emails. Or some of the cute (let’s be real; girly) things I do for him. And he took this chance to make me see the real reasons that I love him. His ability to protect me, even emotionally. His ability to be the ‘good man in the storm’. The heart he has for our relationship. Yes, I would love to get a letter from him at some point in our relationship. But now, what I walked away from this weekend knowing is that he may not love me in the ways I think I want to be – he does it better. And more intentionally.

He and I were even talking about it over the weekend – how many women feel unloved because they aren’t getting the mushy things they’re doing in return. And that’s totally normal, ladies. But maybe, your man doesn’t love you like you love him. He doesn’t love in letters and emails and texts and flowers – he does those things because he thinks he ‘should.’ Maybe, if you give him the chance, he will love you better than you ever thought possible. 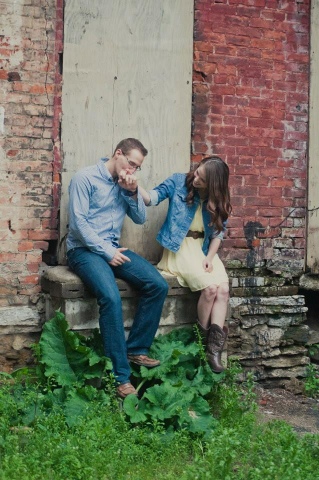