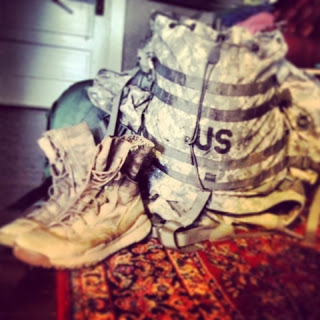 Important disclaimer here; I have never, and will never be in combat. I cannot tell you what it is like to be in that situation, but I have an incredibly patient husband who shares his thoughts with me, and a lot of research on a book, from books and blogs that every military spouse and family member should read, as well as hours and hours of interviews with those who have.

There is a conversation that happens pretty repeatedly whenever people see me out and about without J. Which is, for those of you who don’t know, more often than he is actually around. They ask me where he’s at, and I tell them the school/state/training/country that he’s in. Some small talk happens, and then eight times out of ten, they end the conversation with “Well, tell him to stay safe.”

And I can legitimately say that is one message I will never, ever pass along. I tell him every time someone says they’re praying for him. Every time they say they were thinking of him. Every time they say they want to get to be added to the miles-long list of people who want to see him in the brief times that he is around, and able to be seen. But I will not say to him “So and so said they wanted you to be safe.” (Sorry if you’re reading this and that’s something that you’ve wanted me to pass along.)

More than that – I have not ever told him to be safe, even coming from me.

When we first started dating, that was all I wanted to tell him. It’s a natural response, right? I was in a very new relationship, with a man who was getting ready to start training to be in a particularly dangerous job. It came with the need to be aware of my security in a new way. And the knowledge that my husband was actually someone who could be called ‘dangerous’. Of course I wanted to call after him to ‘be safe’. I will openly admit that I worry about J the second that man leaves my sight. That people want to send him well wishes and a desire to be unharmed is absolutely understandable. For those who know him, personally, they are sending their friend away to a dangerous situation, that they cannot possibly comprehend. The only logical response is going to feel something like fear – asking him to ‘be safe’ or ‘do whatever he has to, to come home’. Please, don’t.

It’s crazy I know – and it almost sounds like I want my husband to be in danger. It’s not that simple, but at the end of the day, the confusing and very counter cultural answer is that I want him to be able to do his job. And ‘doing his job’ does not look like being ‘safe’.

If you look at the definition of the word ‘safe’ it means “protected from or not exposed to danger or risk; not likely to be harmed or lost.” That is essentially the opposite of what every single sheepdog is hardwired to do. J starts to itch to be where he’s needed. I have friends who have gotten out of the army, but got back in a few years later. Not for the money (everyone who knows the military pay just laughed), not for accolades, and certainly not for the safety – they got back in because they needed to what they could to protect the people they’d be leaving behind, and to take the fight directly to the ‘bad guys’ wishing to do harm to innocent people.
Imagine a literal sheepdog. He is prepped and trained – physically, mentally, and emotionally – to be a flock of sheep’s defense and protection. It is what he is bred for, and created to do. It is quite literally in his blood. Now imagine telling him all of this – using his hardwiring to do what he needs, training him, and then turning around a physically declawing and defanging that animal – and then putting him in a muzzle, on a gentle lead. Asking him to protect a flock of defenseless sheep, then taking away his confidence and ability to do what he feels he needs to do. It would not be shocking if he laid down on the job, and half his flock were stolen away by a particularly industrious wolf.

If there’s one thing that I’ve taken away from the research on research on research and countless interviews I have been doing – it’s that the brave sheepdogs who are being sent forward are not meant to be safe. It’s been incredibly difficult to remember that – especially when the sheepdog in question is my friend, or one of my taco night guys, or my husband. As much as I don’t enjoy the idea of the people I love actively being in danger, I like the idea of them being miserable at home even less.
There’s the Chronicles of Narnia quote that I’m pretty sure everyone has heard at this point but that J and I love; “Safe? Of course he isn’t safe! But, he’s good!” The two characters are talking about Aslan, the epic, honest, and terrifyingly good lion. You wouldn’t want the lion fighting for you to be safe- you want him to be good. Fierce, with claws and fur and fangs. And dangerous – especially to those who would wish to do you harm, but compassionate and good towards those they love and are fighting for. That is a sheepdog. That is my husband, and my friends, and the people in your life stepping forward in so many different ways.