There’s this thing that mom jokes about… It’s called the “deployment curse”. The rule is that the moment your soldier goes on deployment, at least one thing will break. Probably two or three, and they will be major appliances (like the dishwasher, or fridge) or something like the car. Also, sometimes children. Laugh all you want – but I’ve seen it first hand. Without fail, when dad goes, stuff just seems to happen; the fridge stops working, the garage door won’t work, and then the dishwasher needs replaced.

So, I don’t have a house with appliances and kids aren’t in the picture for a while, and J isn’t deployed… But I’ve learned over the last few months that we have our own version, The Test Week Curse.

His training is intense and keeps him busy. As with everything, it kind of ebbs and flows… One week will be fairly ‘easy’ and then the next will be packed full of tests, and lots of studying. Which means that our conversations are squeezed in between study groups, and that he really doesn’t have the time to stop and help me handle things…

So, without fail, stuff comes up that I need him to help me deal with, about day two of a patch of time where he really can’t afford to be distracted. Then, I decide that I am going to try to half-way explain what’s going on, but not really, so that I feel like I got to process, but what comes out of that is that he is confused and frustrated, and I don’t understand why he can’t just ‘get’ how I’m feeling. Cue snappy/teary argument that doesn’t get solved because we only have an hour to talk. I feel like I haven’t been listened to, and he probably feels the same way.

It’s kind of exhausting to try to mentally process it out… It’s an internal battle of wanting to take problems to him, and then also not wanting to be a distraction and make things difficult for him, or make him worry. Because no matter how much he tries to focus, if something’s wrong with me, it’s going to cause him to worry. And I also don’t want to make him feel unnecessary while he’s gone – but I don’t want to overwhelm him either.

Obviously this is one of those things that I’m going to have to get better and better at, and that we’re going to have to unpack as a couple, together. (Let’s call that no. 834 of things to talk about when we’re together.) Lots of grace is having to be handed out, all over.

Maybe that’s the lesson I’m supposed to be working on right now? I have this list that I pray over mine and J’s relationship – things I want us to work on, and for him, in specific areas. And two of those are that I will be supportive – legitimately and in ways that he can see, and that we learn to absolutely cover each other with grace. Not just when we feel like it – but when it’s really hard because, dangit my feelings are hurt and I feel like I need to say something about it.

J taught me the phrase ‘Charlie Mike’ a few months ago. It means continue mission. I keep forgetting that this path I’m on isn’t just me wondering aimlessly (although it does feel that way sometimes). I need to remember that even though I don’t have any idea what it looks like at the end, that it’s a path with a purpose. As tiny as I feel, I have to get all my gear ready and keep moving forward. It’s really hard to remember that when I just wanna lay down and sleep – or take the easier path.

It’s funny how a blog post designed to be a venting board for me, may actually have ended up letting me unpack and get to an area where God may have been trying to teach me something – something I’ve specifically asked for. So, I guess the new prayer is that I actually take the chances He is giving me to grow closer to J and more secure in the relationship, and closer to Him and more secure in our relationship, and not get so lost in the actual problem. To keep on moving forward, and trying to grow myself, and push on, even if I feel like I’ve got too much weight on my back. 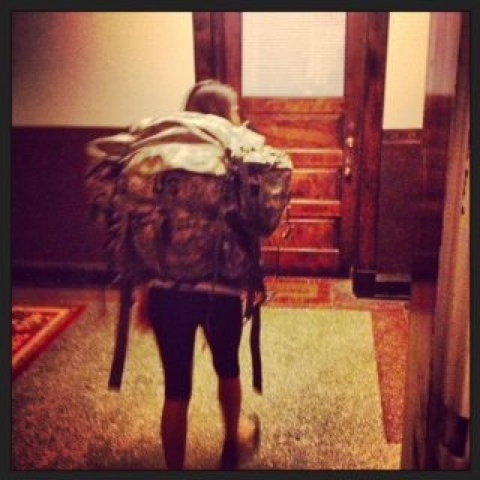